Monkeypox virus (MPXV) is an enveloped double-stranded DNA virus that belongs to the genus Orthopoxvirus and the family Poxviridae. It was discovered in 1958 in monkeys and first observed in humans when a nine-month-old from the Democratic Republic of the Congo was infected in 1970. Monkeypox first entered the US in 2003 through an infected prairie dog connected to the exotic animal trade. This outbreak caused 71 human cases and no deaths. In 2017, monkeypox reemerged in endemic countries and was spread to non-endemic countries via travel. In 2022, an ongoing outbreak in endemic countries has spread internationally by travel and sustained person-to-person transmission.

Monkeypox is in the same viral family as smallpox and cowpox. Infection can present with fever, flu-like symptoms, and swollen lymph nodes. One to five days after symptom onset, a rash will appear. The rash may be subtle but will go through five stages, including the development of papules (raised bumps). Unlike chickenpox, the rash does not itch, but it can be extremely painful. A person is contagious for the entire duration that the rash is visible on the body. The current monkeypox strain is Clade 3 and is considered the least severe, with fatality rates of <1% in developed countries.

Am I protected? How can I avoid exposure?

The smallpox vaccine protects against monkeypox infection, but the US stopped routine smallpox vaccinations after its eradication in 1972, potentially leaving 2/3 of the US population unprotected from the monkeypox virus. Looking at past exposure data, an estimated 26% of unvaccinated persons and 3% of smallpox-vaccinated persons exposed to monkeypox later developed the disease. As with other communicable diseases, persons living in the household with monkeypox cases were more likely to get infected with monkeypox than casual contacts outside the home.

The World Health Organization recently stated, “Anyone who has close physical contact of any kind with someone who has monkeypox is at risk, regardless of who they are, what they do, who they have sex with or any other factor.” Though the current outbreak has been most reported in men, specifically men who have sex with men, monkeypox is not considered a sexually transmitted infection. Monkeypox spreads through the following interactions with infectious individuals:

A significant danger is that people may not know they have a rash or mistake the rash for something else (e.g., pimple, acne, heat rash, allergic reaction, etc.).

What else do I need to know?

This risk to the general public is low at this time; however, there are still actions you should take to stay safe. The virus can remain infectious on surfaces for an extended period of time. Just like we’ve been practicing for COVID-19, regularly disinfect high-frequency touch points and practice good hand hygiene by washing hands regularly and using alcohol-based hand sanitizers. Exercise caution in areas where surface contamination or close contact may be an issue (e.g., gyms, locker rooms, hotels, clubs, public pools, etc.). Pay attention to people in your community or social circle talking about others with monkeypox or thinking someone may have monkeypox, as this is an indication that you are close to the virus.

If you are in a high-risk group or believe to be close to someone in your community with the virus, avoid close, skin-to-skin contact with people who have or think they have a rash that looks like monkeypox, including persons with scabbed over rash. Do not share drinks, eating utensils, personal hygiene tools, towels, bedding, or clothing with them. Do not kiss, hug, cuddle or have sex with someone who has a monkeypox rash until the rash has cleared. As always, having open conversations and continued communications about sexual health with partners and potential partners is a best practice. 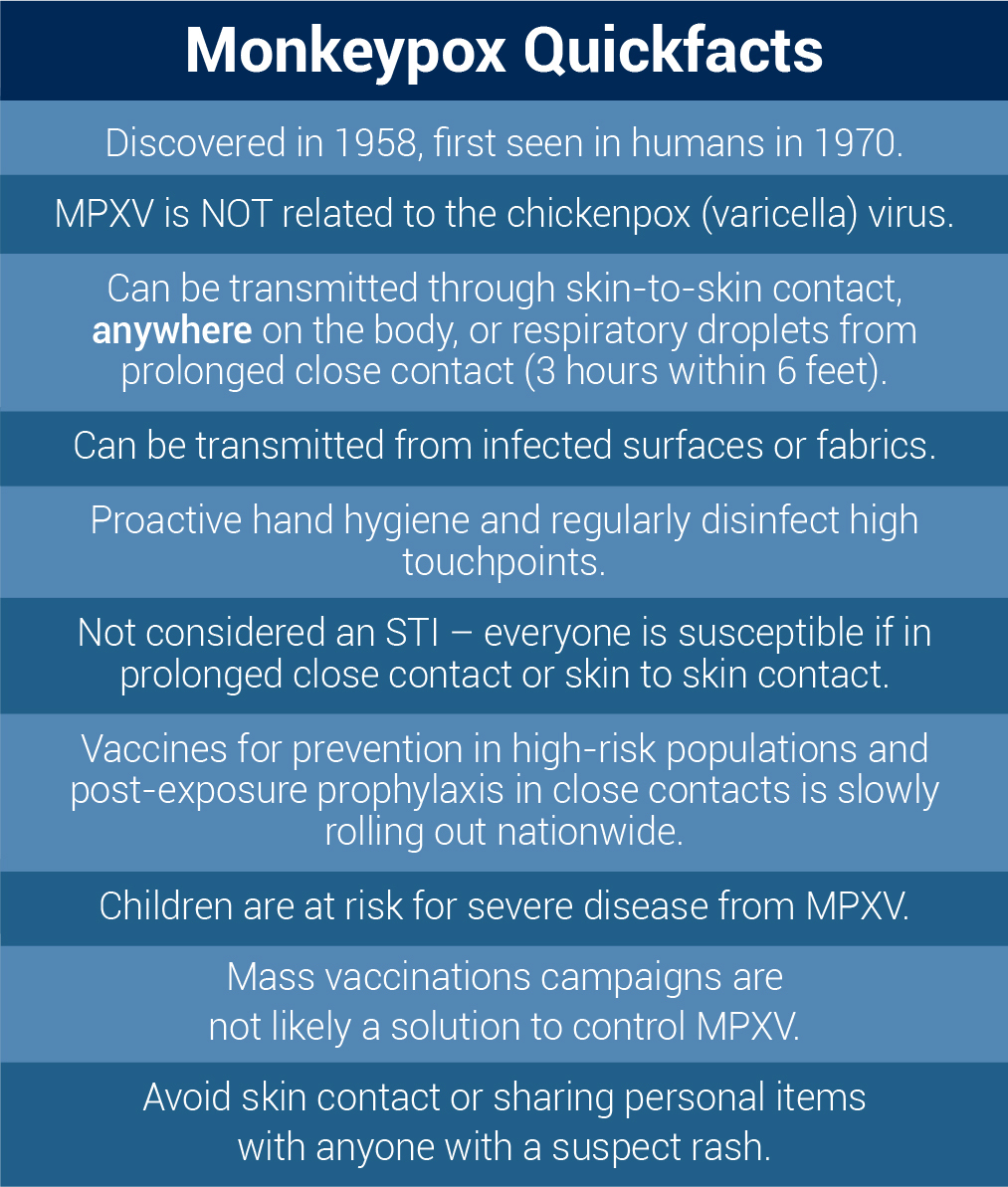 By clicking “Accept” or continuing to use this site, you agree to the use of cookies, as described in our Privacy Notice and Cookie Notice, where and as permitted by law.